Many Black Friday deals are closeouts or just $10 off. These are the real steals. 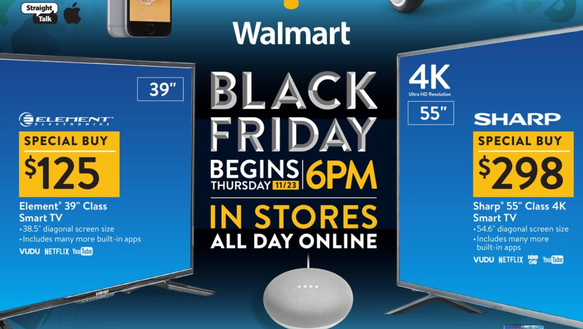 LOS ANGELES — There are thousands of so-called deals offered by major retailers for the shopping holiday that is Black Friday. Not all offer much of a steal.

Many are in the $10-$20 off category, or closeouts on older merchandise. But if you’re keen on substantial discounts for the iPhone or Samsung Galaxy smartphones, video-game consoles from Microsoft and Sony, a 50-inch 4K TV set or connected speakers from Amazon and Google, get your wallets ready.

The big box retailers, Target, Walmart and Best Buy, have revealed their “doorbuster,” promotions, designed to get massive crowds in the stores and online Thanksgiving evening and Friday, in pursuit of the handful of items offered at the lower prices. But unlike years past, many of the offers are available online as well, before the physical stores open.

“I tell people to put your stuff in the shopping cart online, and then hit the switch to pay once the sale starts,” says Melissa Martin of the Blackfriday.com shopping site.

More: Shopping for an iPhone? These stores offer $200-$300 discounts for Black Friday

More: The best Black Friday deals you can get right now

We looked through ads. Here’s where the discounts are meaningful.

—Connected speakers: One of the hottest categories in tech is the voice-activated speaker, both from Amazon and Google, which is practically giving away the new Google Home Mini. It normally sells for $49.99, but Target, Best Buy and Walmart are selling it for $29. Walmart has a $25 gift card that effectively brings the price down to $4, while Target and Best Buy have a $10 gift card. Walmart also has the larger Google Home speaker (normally $129) for $79, with a $25 gift card.

—Smartphones: The Apple iPhone is rarely, if ever discounted, but the big three retailers all have Black Friday specials, with Walmart’s more generous than the others, offering a $300 gift card for purchasers of the new iPhone X ($999), 8 and 8 Plus, 7 and 7 Plus with a two-year leasing deal.

Target and Best Buy’s deal is for the new 8 and 8 Plus only, with a $250 and $200 gift card, respectively. Walmart and Target say for this deal, you’ll need to come into the store to complete and activate it, but Best Buy will allow for online shopping. For Android fans, Best Buy and Walmart both have the $300 gift card offer for the Samsung Galaxy S8, S8+ and Note8 phones.

—Videogame consoles. The Microsoft Xbox One S unit and Sony PlayStation 4 units are both $100 off at Target and Walmart. Both are selling Xbox for $189.99, but Target is throwing in a $25 gift card as well.

The Best Buy physical stores open at 5 p.m. on Thursday, 6 p.m. for Target and Walmart.

Amazon opened a Black Friday “store” on its website November 1, but like the big box stores, it’s reserved major deals beginning for the holiday. The best ones are for Amazon products, like the Echo (which was $149, then lowered to $99 this year) available for $79 or the smaller Dot, normally $49.99, now $29.99.

Additionally, Amazon says it will post a “Deal of the Day” at midnight on each day, while several limited “Lightning” Deals will be posted throughout the day for a specific period of time.

The retailers say they will reveal more deals next week. “We tell people to be attentive early in the week, because the majority of the new deals will be announced by Wednesday,” says Lindsay Sakraida of the Dealnews.com website.

The 10 best free iPhone games of the week

How to Travel for Free With Credit Card Rewards